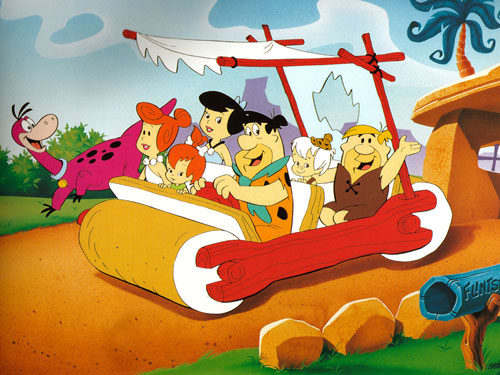 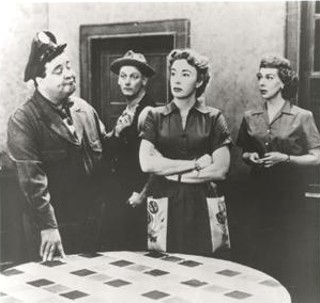 A successful cartoon originally marketed towards adults, The Flintstones eventually became a favorite among children as well. Produced by Hanna-Barbera, The Flintstones aired on ABC from 1960 until their final episode in 1966. Originally titled “The Flagstones” in their pilot, the name was next changed to “Gladstones.” Appearing on numerous sketches, “Gladstones” seemed to be the winner, until the final change to “Flintstones” was made.

Starring Fred and Wilma Flintstone, and their neighbors Barney and Betty Rubble, The Flintstones are often compared to Ralph and Alice Kramden and Ed and Trixie Norton of The Honeymooners. Debuting in 1955, The Honeymooners, starring Jackie Gleason as Ralph, portrayed Jackie as a quick-tempered man who is always chasing get rich quick schemes, just like Fred Flintstone. What’s more, these husbands are always supported by their wives, Alice and Wilma. It is also said that Barney’s voice, by Mel Blanc, was developed after The Flintstones first season and mimics that of Art Carney’s voice for Ed Norton. Taking this comparison a step further, The Simpsons is also comparable to The Flintstones and The Honeymooners.

The Flintstones truly were a modern Stone Age family. By utilizing animals for technological advances they were able to live a 20th century life. They owned a pig, which was used for a garbage disposal, an elephant’s trunk used for running water to clean dishes and a fire-breathing dinosaur as a microwave to pop their popcorn!

A memorable end to each episode was Fred putting their sabretooth cat out for the night on their back step. But then, only to see the cat, Baby Puss, jump through the window into the house and put Fred out for the night instead. Shouting “Willlll-ma!” while pounding on the door, again showed Fred’s funny quick temper. Although, this Baby Puss ending did not play after every Flintstones’ episode.