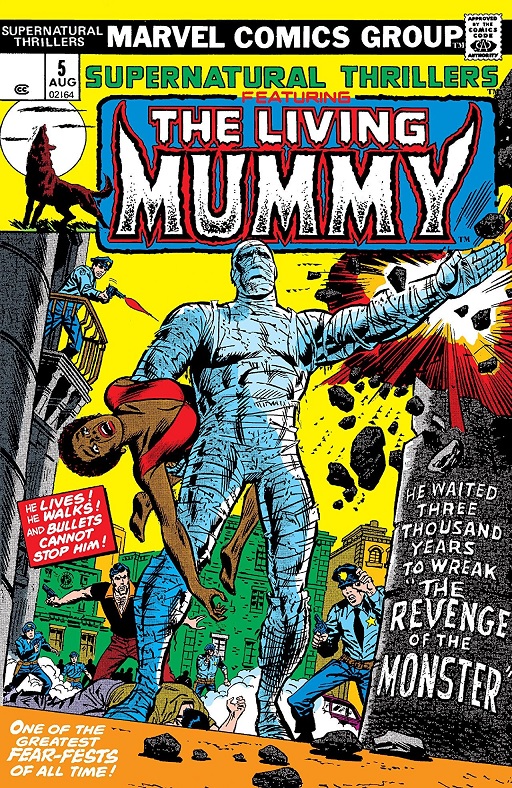 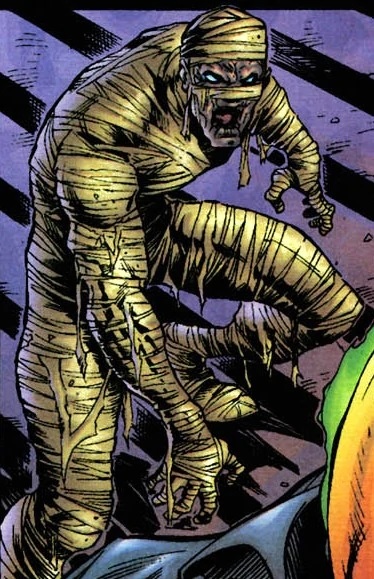 Marvel put a spin on the classic undead mummy monster when Steve Gerber and Rich Buckler created N’Kantu, the Living Mummy. While he possesses mummy traits, he also has superstrength, mystic senses, and is incredibly durable.

Debuting in Supernatural Thrillers #5 (August 1973), N’Kantu’s story began 3,000 years ago when he was the son of T’Chombi, a chief of the Swarili, a North African tribe. When he turned 21, N’Kantu underwent the Test of the Lion to prove that he was worthy of being his father’s successor. Months after he completed the trials, his father died in his sleep and N’Kantu became the chief of his tribe.

One day, N’Kantu returned from hunting to find that his village had been attacked by Egyptians and forced into slavery. He fought to free his people, but was at a serious disadvantage and was similarly captured.

They were taken to Egypt and forced to build monuments to the Pharoah, Aram-Set. After days of working on the most difficult tasks, N’Kantu and his tribe would spend their evenings creating a plan to gain their freedom. Aram-Set and his chief priest, Nephrus, discovered their plot and planned to gather them for a mass execution. N’Kantu and his people revolted, overpowered their captors, and N’Kantu killed Aram-Set.

A monumental victory won, N’Kantu’s next move was to stop Nephrus. Ready for the attack, the evil priest sprayed N’Kantu with paralyzing liquid, bound him to an altar, wrapped his body in papyrus, drained his blood, and replaced it with an alchemical preservative. N’Kantu was conscious for the brutal procedure, then was imprisoned in a stone sarcophagus.

He woke in the modern time, but thousands of years spent paralyzed in the tomb had driven him crazy. After digging himself out, he went on a destructive spree in Cairo, but eventually the Living Mummy recovered from the trauma. Once his mind was clear, the Living Mummy found Doctor Alexi Skarab, Nephrus’ descendant, and was electrocuted and shipped to a museum in New York City.

From there, he was teleported to the Elementals’ dimension and instructed to find the ruby scarab. During his search, he fought the Living Pharaoh and then stopped the Elementals by using the scarab and returned to Earth.