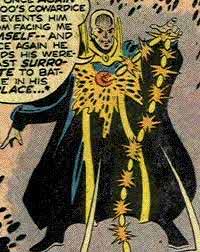 Dr. Glitternight is a bad, bad guy. A creation of Doug Moench and Don Perlin, Glitternight can absorb light and darkness through his blank eyes and convert that energy to power his demon soul. He can steal souls, create anti-soul black light, life-force draining light, can create bat-demons, and solidify ectoplasm, among other frightening powers.

Dr. Glitternight was introduced in Werewolf by Night #27 (December 1974) as a member of the Five-Who-Are-All, a group of powerful mystical beings from the Region Beyond Reality. Craving more power, he absorbed fellow group member Fire-Eyes, so the others retaliated by shrinking him to human size and banished him. He landed on Earth where his extradimensional abilities gave him power over human souls. He became a powerful sorcerer and started planning to kill everyone on Earth and turn them into his own demon army but was stopped by Taboo.

Then Topaz sought his help to restore her powers, but instead Glitternight stole a part of her soul and turned it into the monstrous Soul-Beast. Jack Russell, the Werewolf by Night, found Glitternight and killed the Soul-Beast. Glitternight followed Jack, Lissa Russell, Topaz, and Buck Cowan back to Jack’s family castle and attacked them. It was the first full moon after Lissa’s 18th birthday and she started to transform into the werewolf, but Glitternight interfered and made her a were-demon under his control. Taboo used his life-essence to free Lissa, giving the Werewolf time to slash the soul-circle on Glitternight’s chest and nearly destroying him.

Glitternight relocated to Haiti where he collected zombies and turned Topaz into a Harpy to use as a power source to take human souls. The remaining Three-Who-Are-All joined the Werewolf and Brother Voodoo to force Glitternight to bring out Fire-Eyes. The heroes cut the ties between them and Glitternight was seemingly destroyed.