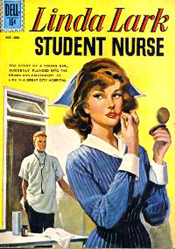 Between the years of 1961 and 1963, Dell Comics took its pursuit of a hit romance title into the fictional General Hospital with Linda Lark, Student Nurse (later titled Linda Lark, Registered Nurse and Nurse Linda Lark).

Readers watched the modestly dressed auburn-haired trainee in the quarterly mature as she finished school, pined after a more fulfilling private life, and thrived in her career.

One thing remained constant throughout Linda’s run: her long-held infatuation with Dr. Joe Blasko, the dashing, broad-shouldered physician next door. With the help of colleague and confidante Nurse Charley, Linda set forth to sort out the demands of her job and her feelings for Joe.

Interestingly, Lark’s adventures weren’t the only stories featured in each issue. There were also biographical sketches on pioneering women in medicine, as well as the saga of “Tramp Doctor,” an alcoholic on the mend, practicing medicine in developing countries after his recovery.

The title, with its melodramatic soap opera bent, was well received, but Dell pulled the plug in favor of its more popular cartoon-based comic titles.