Artist Graham Nolan on His Career: From Batman to Monster Island 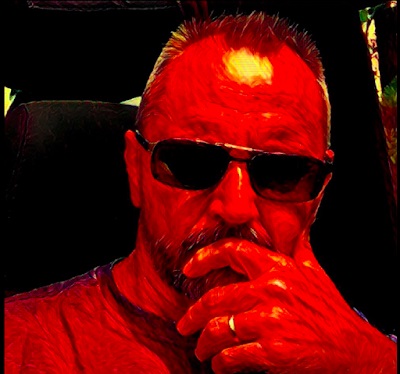 Artist Graham Nolan is lauded for his work in Batman titles, The Phantom Sunday strip, Hawkworld, and his all-ages adventure creation, Monster Island. In particular, Nolan made his mark on the Dark Knight by co-creating Bane, one of Batman’s most formidable foes. Nolan recently spoke to Scoop about his work on these titles, the significance of Bane, and what he’s working on now.

Scoop: Were you a fan of comics when you were growing up?
Graham Nolan (GN): Oh, yeah. I started with monster magazines which always had articles or ads about comics. I really got into them when my 6th grade teacher brought a stack for the class to read at recess. Scoop: What’s your artistic process like – do you do a lot of preliminary sketches and drafts?
GN: At this point in my career, no. I layout the story and nail it about 90% of the time. If I get stuck on something or I don’t like my attempt, I keep it as a placeholder and move on to return to it later when I have a clearer head.

Scoop: In Bane, you co-created a villain who quickly became one of Batman’s most formidable foes. What went into creating that iconic character?
GN: Bane was a necessary story element needed for the Knightfall story arc that Denny O’Neil wanted to tell. We needed a villain to take out Batman so we could replace him with a meaner, more ruthless Batman. Fans were going nuts over the Punisher and Wolverine who killed their opponents and thought Batman should do the same. We wanted to show them why that was wrong and give them a Batman that did kill. There was nobody in Batman’s rogues gallery at the time to do it, so Bane had to be created. Chuck Dixon came up with his background and I designed the character based on where he was being raised and certain story needs.

Scoop: Which of the stories you worked on in Detective Comics and other Batman books was the most challenging? Why?
GN: Every story presents its own challenges, whether it be the staging, the locations, reference needed, etc. I did them so long ago, I can’t think of any off hand that were harder than another.

Scoop: What does it take to set and maintain the tone in Batman comics?
GN: Batman was my favorite hero as a young boy growing up watching the Adam West TV show and reading the comics of the ’70s. Every artist has their approach to the character, mine is based on that he is a hero first. Everything he does is a self-sacrifice. It’s not revenge, nor is he a psychopath. That is the first thing that goes into his “look.” The rest is steeping this hero, clad in dark colors (that really represents “light”) into a shadowy world filled with bad people. He is the Dark KNIGHT. That errant knight on a holy crusade seems to have gotten lost and everyone seems to concentrate on the DARK aspect which tends to make the character a selfish narcissistic nutjob. Scoop: What did you like about working on The Phantom Sunday strip?
GN: The Phantom is a great character and I had a lot of fun working on him. He was my Mom’s favorite character growing up.

Scoop: How is working on a Sunday strip different from working on a monthly comic? Does one present more of a challenge than the other?
GN: The biggest difference is the format. A comic book page is a blank canvas that you can layout the story any which way that works. Comic strips have panel breaks and tiers that have to be adhered to because newspapers cut them up to fit the formats of their Sunday comics pages. Much more freedom on a comic book page. Scoop: How did you come up with the concept for Monster Island?
GN: I was getting fed up with the direction of comics in the late ’90s. The superhero comics were too violent and overly sexualized for me to give comp copies to my young daughters. I decided to write and illustrate an “all ages” comic filled with high adventure that someone of any age could read and enjoy on different levels. Scoop: You’re working on a sequel, right? What’s the premise for that one?
GN: The sequel, Return To Monster Island is done and published. It and the original can be purchase here: www.indiegogo.com.

Scoop: Outside of comics, you provided art for Dungeons & Dragons. What were those experiences like?
GN: The D&D gigs were some of my first freelance jobs. I was never into that gaming, but it was fun and a challenge to work on that stuff.

Scoop: Switching gears, are you a collector? If so, what do you collect?
GN: I’m trying to collect all the Stan Lee/Jack Kirby Fantastic Four comics. The only big one (as in expensive) that I’m missing is #5, so if anyone wants to make a deal…

Scoop: What are you working on now and how can fans support your work?
GN: I’m currently finishing up The Expendables Go To Hell graphic novel with Chuck Dixon which is available here: www.indiegogo.com.

For more information on convention appearances or commissions for Graham Nolan, contact his booking agent at Eva Ink Artist Group at: evaink@aol.com.