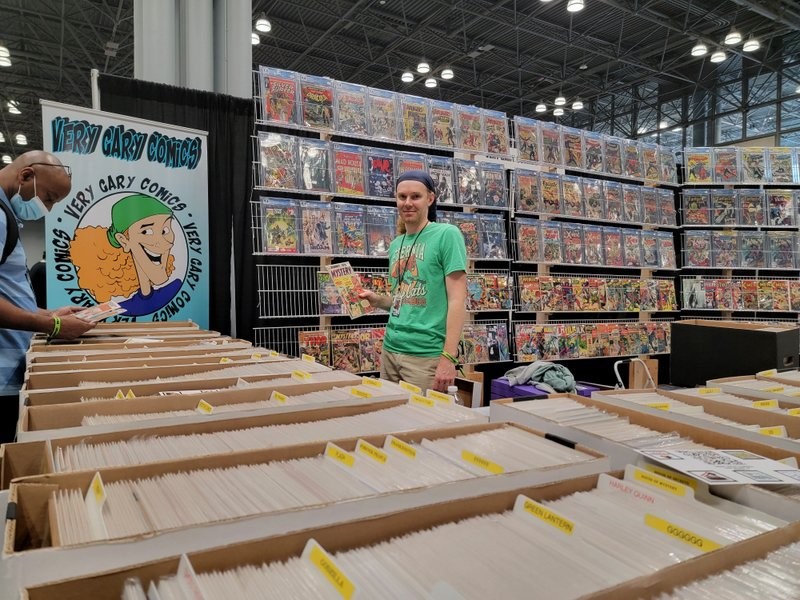 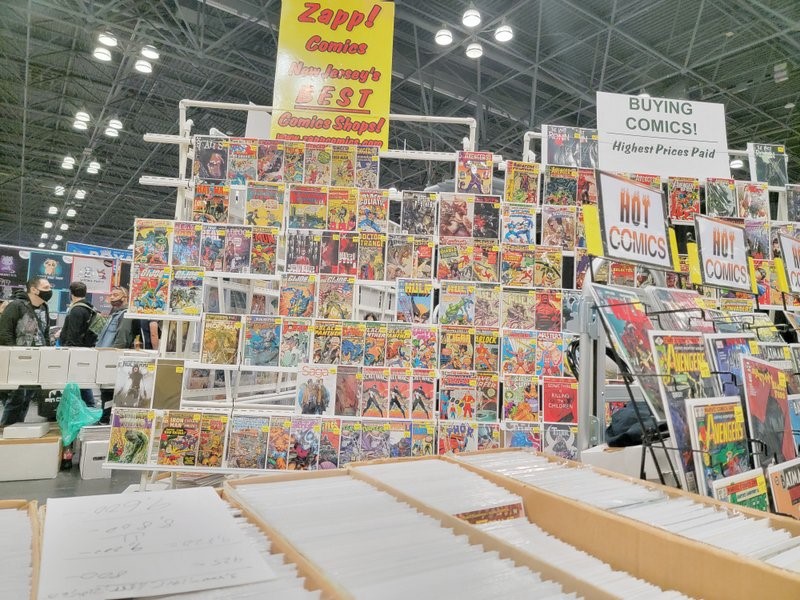 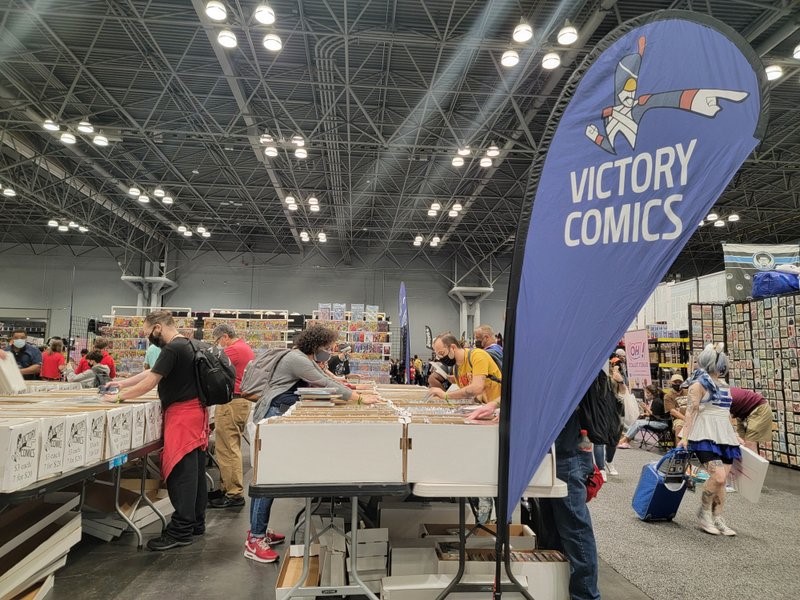 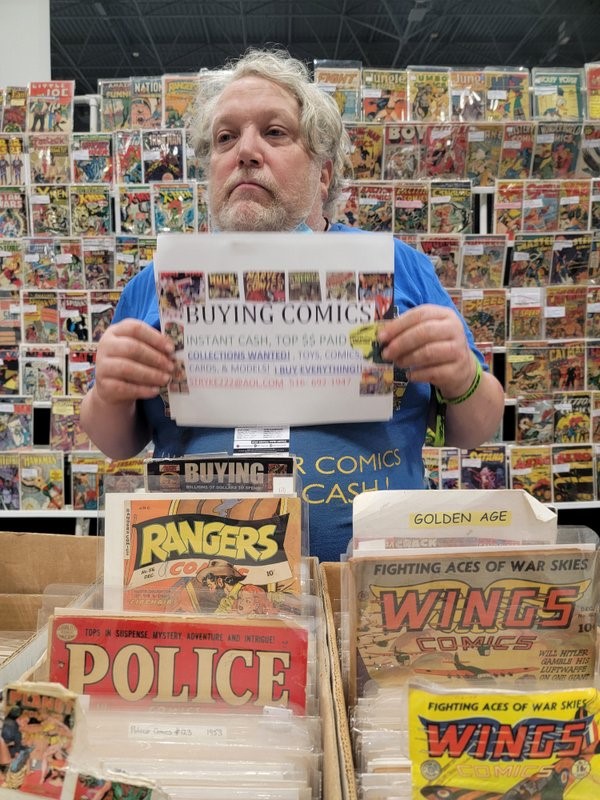 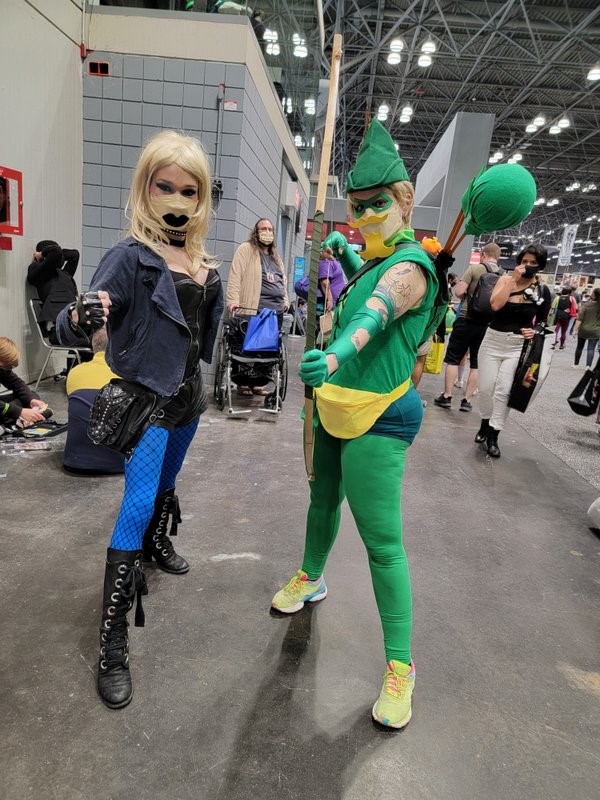 October is a big month for pop culture fans because it is when New York Comic Con (NYCC) is usually held. After cancelling the 2020 event due to the COVID-19 pandemic, Reed Productions brought the show back to midtown Manhattan’s Javits Center on October 7-10, 2021. Local news outlets heralded its return with extensive coverage throughout the weekend.

In terms of creators, there were easily over 30 featured guest artists including Aaron Bartling, Amy Chu, Brian Azzarello, and Greg Capullo, plus over 400 more in Artist Alley. The odds were pretty good that there was an artist every attendee wanted to meet.

NYCC hosted over 30 media guests like John Cena, Adam Savage, and Edward James Olmos. William Shatner took the stage on the first day in a spotlight panel to discuss his fears over his then-upcoming trip to space. Hayden Christensen visited the Empire State Building on day two of the show to light the building in red in celebration of NYCC. Also on day two, fans were treated to a surprise screening of Ghostbusters: Afterlife following a panel with the cast and crew, including Finn Wolfhard, Carrie Coon, McKenna Grace, Logan Kim, Celeste O’Connor, Gil Kenan, Ivan Reitman, and Jason Reitman.

There is a lot to do at this show and as I have said in the past, you need to go into NYCC with a plan. How you plan depends on your preferences, so if you are a panel devotee then you set your day’s schedule around the ones you want to attend and where you need to travel to get to them. The dealer’s room is very large and different areas of the floor house different categories of dealers. So, vintage comics, toys, video games, and creators or media guests could be found in specific areas. Javits is a very big place, so travel time must be factored in as well. Meals can also get tricky with long lines at the food court and outdoor food carts. Never expect to do it all in one day, or even in all four. If one day is all you have, make a plan ahead of time.

One of the first things I came across was the gaming area where players had started lining up the night before. It featured organized play, tournaments and console free play for all the hottest new games, retro favorites and can’t miss classics, Dungeons and Dragons sessions, tabletop board games, and card games.

Panels were held on the main stage and in online virtual panel rooms, that gave access via a digital pass. What is especially cool are the panels geared toward educators, liberians, and comic book professionals. These panels can be used for professional development and can give them professional days to attend the show. As she does every year, Allie (a teacher) went to several of them. Two in particular were an educational work shop called “Can We Finally Admit Games Should Be In Classrooms” and “Graphic Novels As Resources For Kids That Tackle Anxiety” which she especially liked.

One of the coolest events held at NYCC this year was a panel in which two technologists and one astronaut from NASA gave space travel enthusiasts a taste of what they were all working on to enhance our off-world missions. From improving astronaut’s space suits to new robot technology and more, attendees were given a look at what the future holds for space travel.

NYCC hosts the Harvey Awards, named after Harvey Kurtzman, the creator best remembered for creating MAD. The Harvey Awards honors books and creators working in sequential art across a variety of categories. The categories included book of the year, digital book of the year, best children of young adult book, best manga, best international book, and the best adaptation from a comic book/graphic novel.

NYCC offered family-friendly fun at the Family HQ, for Star Wars fans, amateur artists, or aspiring wizards. Kids and parents were able to participate in a variety of drawing workshops, interactive activities, and entertaining performances. In one of the workshops, Allie met Archie artist Dan Parent.

A new feature at the 2021 show was the introduction of the Community Lounge. It was a space for community groups to run meetups/panels, network with fellow community groups, and promote their organizations for further events and membership. All the groups were involved in some aspect of fandom, gaming, mental health, and blerd culture.

Walking the aisles and talking to long-time dealer friends, I got very positive vibes as they told me how pleased they were with sales. Vintage comic book sales are continuing to boom with Silver Age keys leading the way. However, there was a good range on dealer’s walls of comics from the mid-1930s to the current hot books. Marvel strongly dominated the dealer’s display racks. Superworld and Harley Yee in particular were very happy with the show.

We also got to meet up with friends such as art collector Frank Giella (the son of Joe Giella), comic collectors Ken DeTora and Paul Zuckerman, and Allie’s close friend, NYC librarian Runita Toomer. New friendships were made as well. I got to talk with several cosplayers and was very happy to see that they knew the history of the characters they were portraying and they were not shy about giving me background on them.

NYCC followed New York City and state Covid guidelines for all attendees, vendors, guests, and media representatives. Everyone aged 12 and older needed to be fully vaccinated against COVID-19 and provide proof of vaccination. Everyone was required to wear an approved face covering and con officials monitored attendees to ensure that masks were on. Badges were limited to 140,000 and plans were in place to determine how many people were permitted in the building each day and at a given time.

It is hard to overstate the importance of this show to attendees and New York City as a whole. CNBC reported that in prior years, the con generated more than $100 million in economic activity. The loss of that activity in 2020 was a tremendous blow to a city battling the impact and cost of Covid. The city received a much needed economic boost from this year’s NYCC. For the fans, there was a feeling of coming home after no show in 2020 and this was stated to me by several of them.

Those traveling into the city used multiple airports, various regional train and bus lines, along with driving in. There are also many hotels conveniently located nearby and many in the outer boroughs where hotel rooms are almost always cheaper than in Manhattan. While in the city, attendees could travel by taxi, city subways, buses and Ubers. As people arrived from whichever method they chose, it was a welcome sight to see them stretched out on sidewalks for blocks on end on their way to the show.

The Javits offers a food court with a nice variety of options from pizza to hamburgers and a lot more. Outside the center, there are multiple food carts and once away from Javits, just a vast number of diners and restaurants for after a long day of fun at the show. Each night we celebrated at a local and very popular pub on 7th Avenue called Mustang Harry’s, and the food and service was outstanding each night.

As Allie and I left NYCC, we were already looking forward to October 2022 and the 16th edition of this great show.

New York Comic Con will return in 2022 on Thursday through Sunday October 6-9 at The Jacob Javits Convention Center located in midtown Manhattan.

To see more photos from NYCC, check out our In the Limelight coverage.