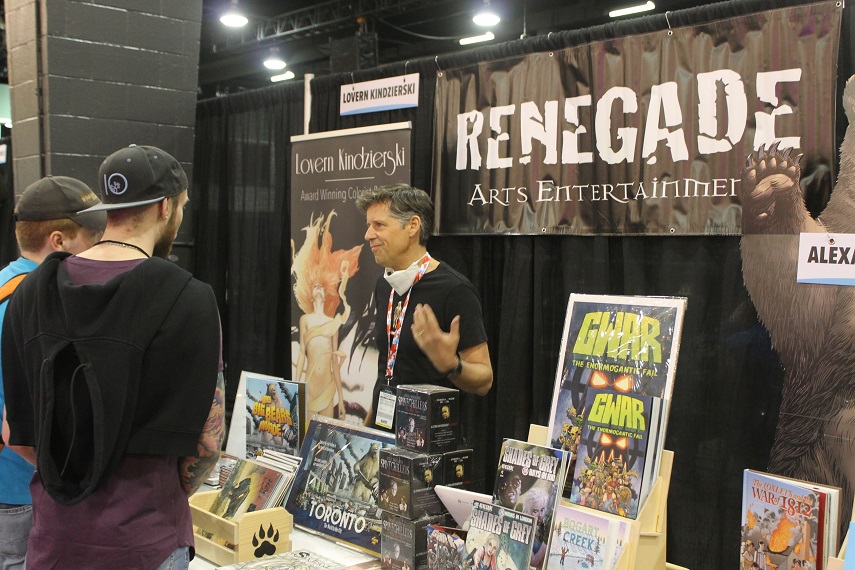 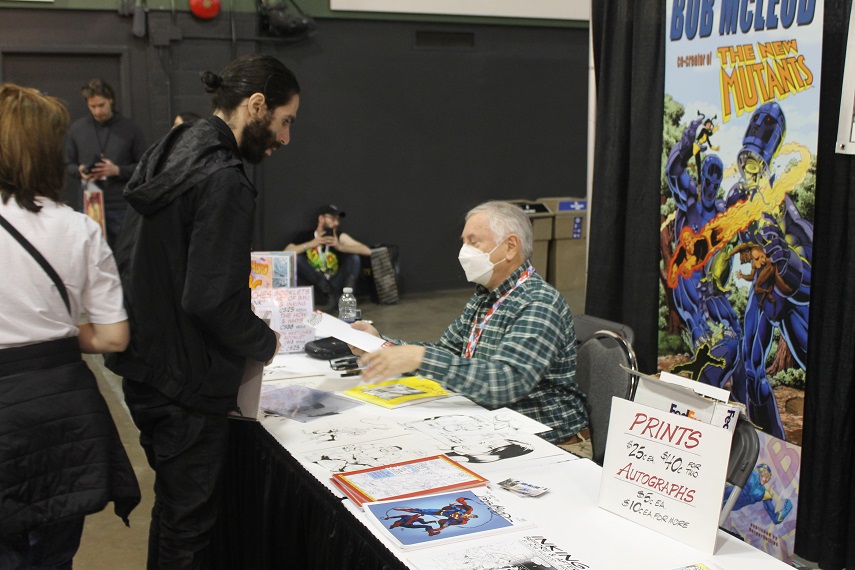 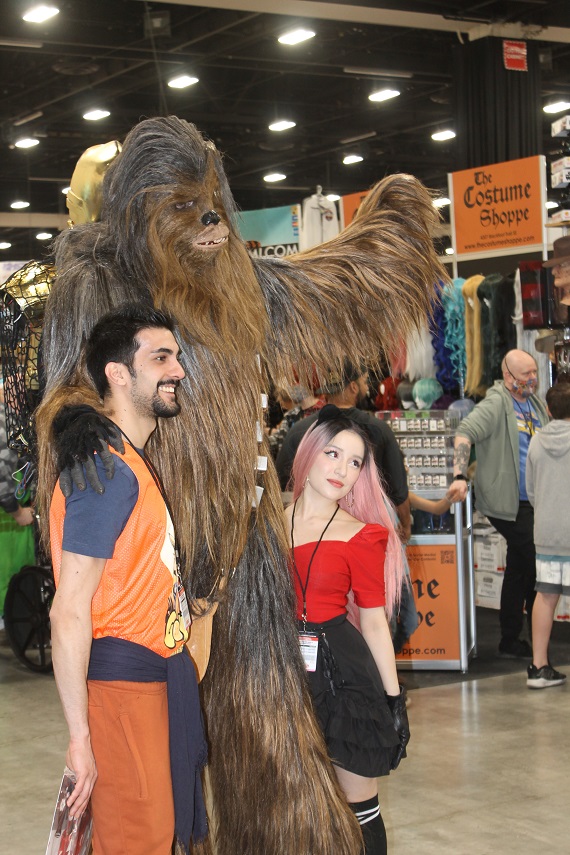 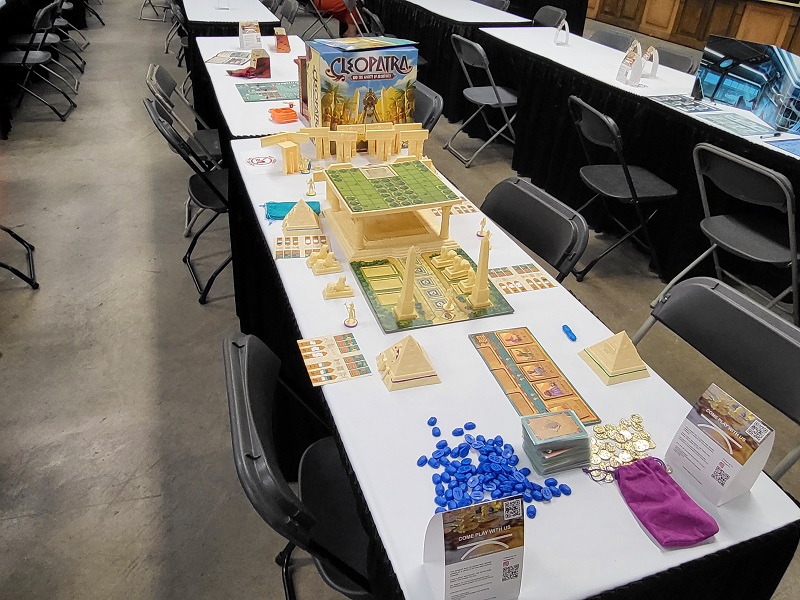 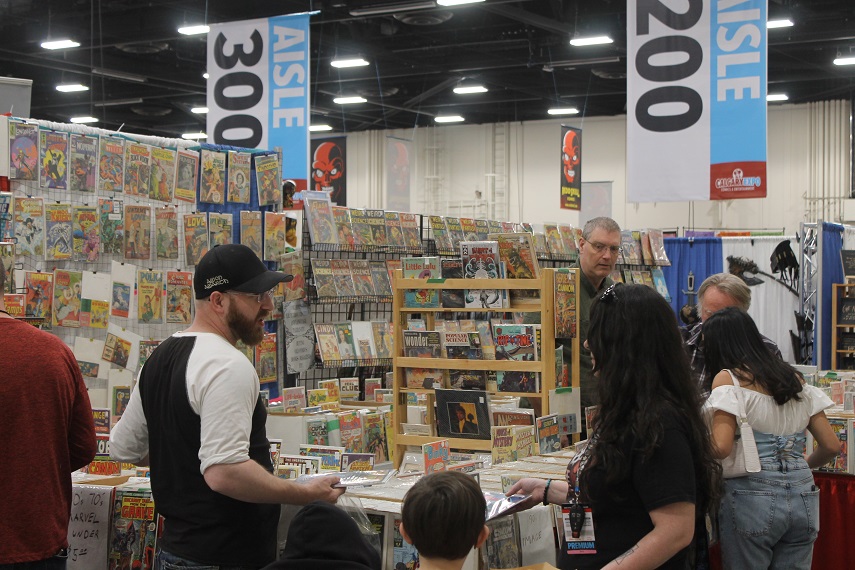 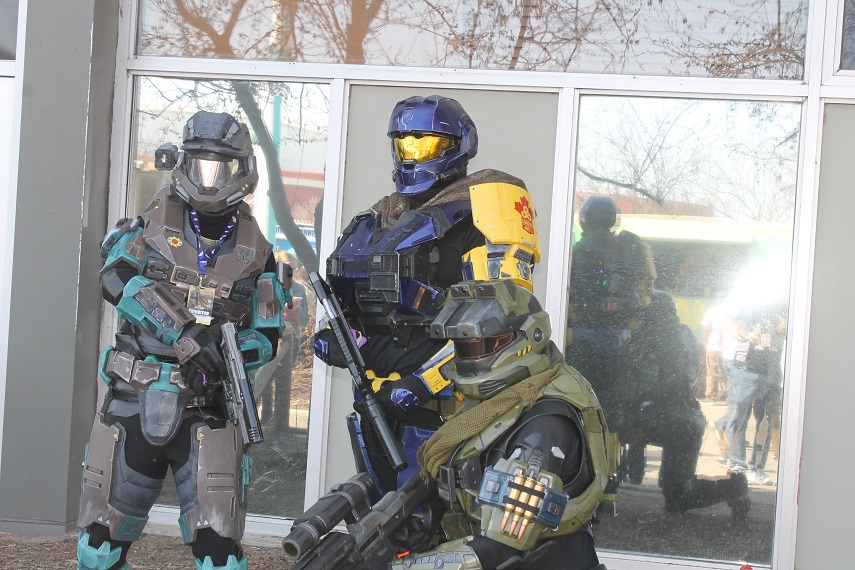 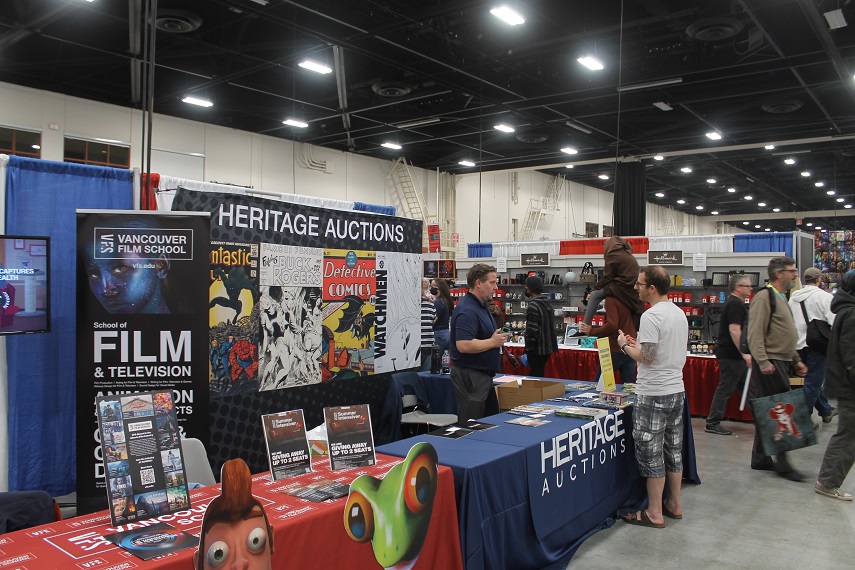 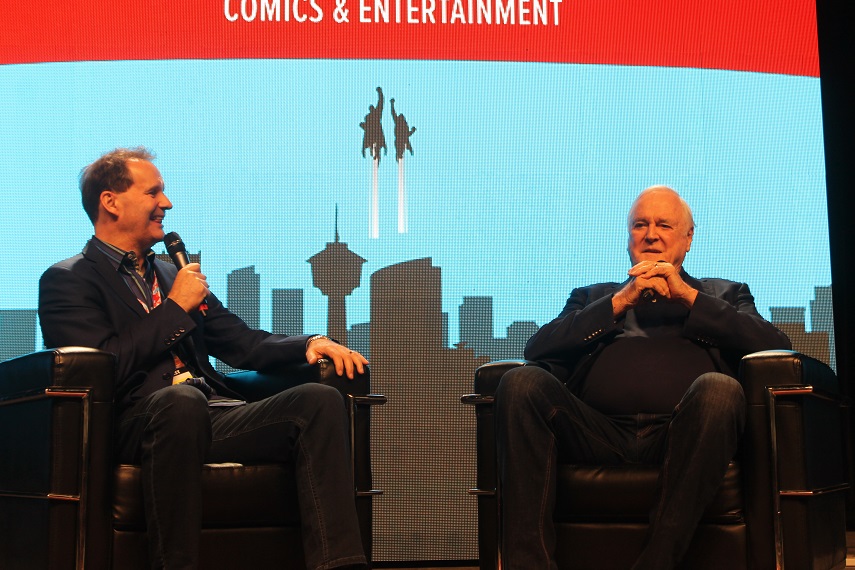 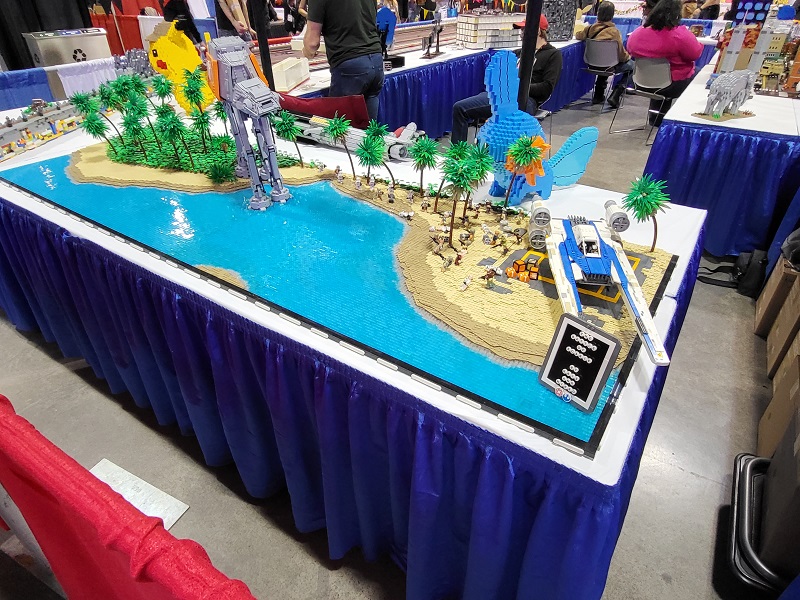 With two years of pent-up fan expectations, comic book collectors and pop culture aficionados converged on the Big Four and BMO Centre at the Calgary Stampede Ground on April 21-24, 2022 for Fan Expo Calgary.

This year’s show, the 15th, was spread between two facilities, the BMO Centre dedicated to celebrities, cosplay, comic book dealers, a family zone, and new areas like the LARP Lounge, and the Big Four with Artist Alley and more traditional non-comic retailers ringed the Big Four Stage.

In the celebrity room, Middle Earth temporarily relocated with Lord of the Rings stars Elijah Wood, Sean Astin, Billy Boyd, and Dominic Monaghan to great demand. William Shatner beamed down on Thursday and comedy legend John Cleese entertained Alberta audiences on Saturday. Cast members of Clerks and Brendan Fraser mingled with fans in the BMO Centre. Martin Kove of Cobra Kai thrilled fans of the new TV show and Karate Kid franchises, and he took in a Flames game on Saturday night.

The 2022 version of Fan Expo Calgary was planned to start with the annual Parade of Wonders, but a freak snowstorm cancelled the event. Undeterred by the ominous start, attendees flocked to the Stampede Grounds to officially start the celebration.

Calgary Mayor Jyoti Ghondek, who traditionally walks the parade, took in the show with her daughter on Thursday and Saturday to show her support for the event. “My daughter and I have been coming to the show for years. It is an important part of Calgary,” she said.

Cleese spoke to a packed house Saturday afternoon and he did not disappoint. While speaking much about writing smart comedy, he waited to start his session until the press took their photos. When asked about his favorite moment in Monty Python, Cleese pointed to an early writing session with Graham Chapman that would eventually turn into the famous cheese shop sketch. Cleese played an increasingly hostile patron attempting to buy cheese only to be met with excuses about why the shop is out of every type he attempts to order. Cleese said he had major doubts about the scene despite being constantly reassured by Chapman that it was funny.

“So, I started to read it out at the Python read-through, which we had every week, and there was a bit of silence at the start and my stomach tightened up and I thought ‘Oh God this isn’t funny after all,’” Cleese said. “Then [Michael Palin], bless him, started to giggle. The longer we went on the more he giggled. Then he lost control. I’ve never seen him laugh like that in my life. He started screaming with laughter and then, which is wonderful, he slid off his chair and rolled around on the ground holding his sides. That was the best moment I ever had in Monty Python.”

When asked by a fan about the status of comedy today, he entered into a monologue of ethnic jokes that had the crowd howling to make a point. “We make fun of those we are close to with affection,” said Cleese. “When we forget that and become mean with our comments we have come too far.”

He also added that the art of making good comedy is different than making action or drama productions and many directors forget that. To make his point, he spoke about the scene in Monty Python and the Holy Grail when the son is going to be married to Princess Mookie and the scene set up with a fixed camera and it worked wonderfully. “No close ups, no changes, just comedy and we let the scene tell itself,” he said. “That is comedy.”

When it was time to leave the audience, Cleese dawdled and dug into his vault of Italian and German jokes while the host and co-host encouraged him to get ready to sign autographs. Even after he left the stage, he kept the fans wanting more, like a master of his craft. He ‘cleesed’ everybody.

For many fans, the four Hobbit actors were the main attraction throughout the show. With lines for autographs stretching deep all weekend, the evening event was their payoff as the four were together for the first time in 10 years. The sellout show thrilled Lord of the Rings fans of all ages with conversation ranging from nude bath tub pictures to dramatic scenes and the stories behind them.

Astin told a story about a time when he and Wood were summoned by director Peter Jackson and co-writers Fran Walsh and Philippa Boyens for a meeting. He recounted being concerned that they were in trouble, as if they’d been “called to the principal’s office.” Instead, the director and writers arrived excited because they’d just written a new scene for Frodo and Sam.

“So, they came down and they had two pages in their hands, and it was precious to them that they had these two pages, and they handed them to us. It was the end where Frodo is leaving after the breaking of the fellowship, and Sam tries to go with him and is gonna drown. And then Frodo pulls him out and it’s like, ‘I’m coming with you’ – that moment. They didn’t have that. That heart, they felt it was missing. And I know that it’s us and working with us and how we were that inspired [it]. They figured it out. They cracked the code.”

“It had also been written in reverse,” Wood added. “Initially, I’m the one who falls and almost drowns, and you pull me out.”

In addition to William Shatner, Star Trek fans got to meet The Next Generation star Brent Spiner and recurring guest star John DeLancie – both veterans of the Calgary show. Clerks and Jay/Silent Bob were also well represented, so fans of every interest and genre would get their fill of celebrity guests.

Artist’s Alley hosted close to 40 professionals from around North America who crafted commissions, did autographs, and posed for photographs. Lovern Kindzierski and publisher Alex Finbow of Renegade Arts Entertainment from Canmore, brought Hell’s Flaw, the newest volume in the Shame series, illustrated by John Bolton. “We have the next volume ready to go almost, but it will be at least January and by the next show we can distribute it,” Bolton said.

Finbow explained that the last two years has been difficult, but they have diversified their services and even did a video for Iron Maiden.

Archie stand-out artist Dan Parent sold original art, sketched the Riverdale gang and chatted with his supporters. Fernando Ruiz, his frequent co-creator, has been busy at the Joe Kubert School. “Fernando is teaching full-time now in addition to freelancing,” Parent said. “For a while he was teaching part time and also was the receptionist!”

Like all veteran storytellers, Grell shared his experiences from five decades with those who appreciated his work at different times. Older readers who grew up on his Legion of Superheroes, Warlord, Superboy, Batman, Green Arrow, Sable, and James Bond with Bill Finger Award Winner, Don McGregor, his run on the Tarzan strip and other titles were treated to an “I was there,” recollection.

Grell related the story of a Green Lantern story by Denny O’Neil when the characters devolved, and he fundamentally disagreed with O’Neil. “I thought that Oa should be a human being instead but O’Neil insisted that he should be something else,” he said. “Denny was the writer, so he won.”

He remembered his first encounter with comic book legend, Joe Sinnott. “I was at a show, and I hear my name and it was Joe,” he said. “He told me that he knew my dad in the war. Joe had been to the island first as a Seabee, and my dad came next. I never forgot that. He was so gracious.”

For Sinnott’s 80th birthday, industry professionals illustrated special birthday cards and greetings and Grell was part of it. “I drew a pretty girl with a tattoo on her butt/thigh that read ‘Joe was here,’ and he loved it. Even better, he inked it as well! That was classy.”

Canadian artist Tom Grummet brought his 40 years of experience to fans along with classic Grummett posters and comic book pages. An honored guest at Canadian conventions, he is always a crowd pleaser.

As creator of Captain Cannabis, Andru shared his Captain Canuck inspired character with great success. “I have an online presence, but it is shows like this where I sell most of my books,” Andru said. “You have to be in front of your readers and buyers, and this show has been good.”

Andru, who has been a professional illustrator for four decades, has credits in Rock And Rule, the Nelvana animated film, Captain Canuck with George Freeman, Charlton Comics and his own book in addition to being a computer analyst during the 1990s.

Buekert, like Jones, had two tables at the show to capture a better demographic. While he signed a good amount of books, his framed product captured a different audience, while Jones had his second booth in a different building. “With two booths, it makes a lot more sense in fan contact,” Buekert said. “She sells my pictures, and I sign them. It is a win-win.”

Veteran inker, Bob McLeod brought his sketchbook and Superhero ABC product to Calgary which sold out at his last appearance. The creator-artist for Marvels’ New Mutants among others, McLeod had a steady stream of collectors of his prodigious work output.

A special guest at the show was Heritage Auctions. With many comic book dealers both selling and sending books for grading, the Canadian representative, Matt Newell, spoke about the questions he was getting from collectors. “When people send books in for grading to sell them, they don’t have to pay upfront,” Newell said. “We take the cost out of the selling price, so it is easier. However, for those who merely want to grade their books, there is a cost.”

He noted that they had already sent books for grading that they had gathered from the show. “We just don’t take comics but also sports cards, video games, coins, VHS, and many other collectible categories now,” he added. “This last year has seen successful auctions in these new categories.”

The BMO Centre also included two special spaces for the first time: a kid zone complete with empty boxes for kids to build forts and tunnels and a special LARP Lounge for game players to sit and enjoy a special brew.

The next edition of Fan Expo Calgary will be held on April 20-23, 2023, prior to that, the Fan Expo Edmonton event is scheduled for September 16-18.