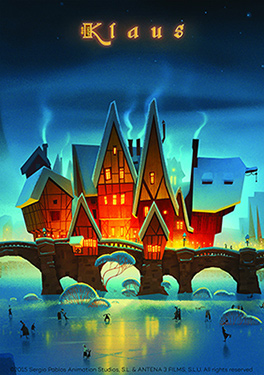 Netflix has debuted a trailer for the upcoming animated holiday film, Klaus. The film is being directed by Sergio Pablos, known for having created the Despicable Me franchise.

The story will follow Jasper, a postal worker in the Arctic Circle who befriends a local toymaker, Klaus. Together, they work to spread the joy of gift-giving in the otherwise unfriendly town. Jasper and Klaus will be voiced by Jason Schwartzman and J.K. Simmons, respectively, and are joined in the cast by Rashida Jones and Joan Cusack.

Klaus uses a hybrid animation style of both computer-generated and traditional 2D animation. It arrives in theaters for a limited engagement on November 8, 2019, before arriving on Netflix on November 15.