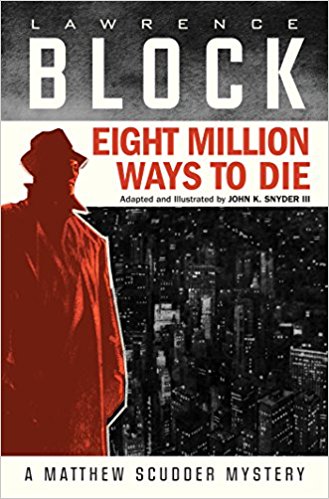 For those of us who have been around long enough to remember the fresh, crisp promise of John K. Snyder III’s Fashion In Action – the first female action hero team in comics – or the incredible noir potential of his work with Matt Wagner on Doctor Mid-Nite, the quality and permeating ambience of the writer-artist’s adaptation of Lawrence Block’s acclaimed novel Eight Million Ways To Die may not exactly be shocking, but it’s still a very pleasant surprise.

There just aren’t that many creators with this much experience under their belts who are still elevating their game. Snyder isn’t just coasting on past glories; he’s delivered a masterpiece of crime fiction.

Eight Million Ways To Die may well be Snyder’s magnum opus, and it is unquestionably the best work of his career. His art and colors flow together in stunning fashion, blending into a gritty, well-researched New York City of the early 1980s with a distinct cast of characters. From bars to back alleys, from high-end hookers to AA meetings, the atmosphere in this adaptation is more than just a mood or a setting; in Snyder’s hands it’s another character.

With the writing, too, Snyder surprises even his most ardent fans, of which I’m one (Disclosure here: I’ve edited and art directed John on a series of covers for The Overstreet Comic Book Price Guide over the years). He captures the nuances and subtleties of Block’s story in a way Hollywood should study (they completely missed it) and brings together text and art seamlessly.

Adapting this particular novel may have been a true calling for Snyder. One can only hope that IDW or some other publisher sets him to work on a similar project immediately, if not sooner. The under-developed world of noir comics needs more of this.