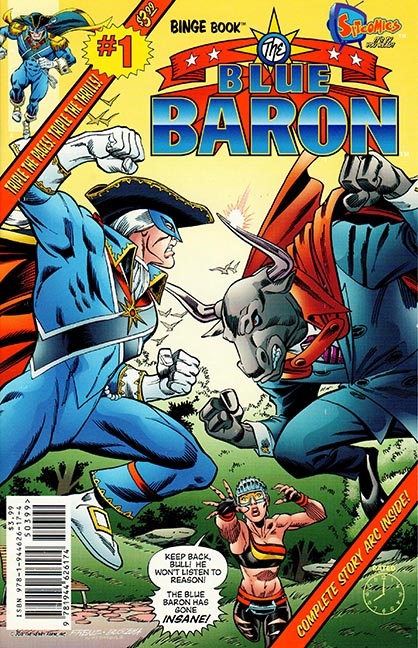 An engaging body-swapping comedy in the form of a standard superhero story, Blue Baron #1 is a compelling read and without a doubt provides an unexpected amount of bang for the buck. The product of TV writer-producer and lifelong comic book fan Darin Henry (Seinfeld, KC Undercover) pencil artist Ron Frenz (Spider-Girl) and inker Sal Buscema (Incredible Hulk), this comic delivers three issues’ worth of story and art for a $3.99 cover price.

The set-up is pretty straight-forward: The Blue Baron, a superhero since Colonial times, has defeated villains of all shapes, sizes, and origins for more than 200 years, but now he finds that he’s switched bodies with a current day eighth grader.

The Blue Baron #1 introduces a whole new shared universe that Henry has created, one that is easily accessible for readers. Unlike nostalgia-driven efforts that ape the mainstream comics of days gone by, this issue and the others in the line take the great storytelling lessons of older comics and give them a modern sensibility.

It’s actually sort of beyond awesome that Henry has employed master storytellers such as Frenz and Buscema, who clearly work together brilliantly, and remind us that great storytelling is something that many in comics don’t do as well as they think they do.

Editor’s note: We expect that the Sitcomics/Bing Book line should be available to retailers from Diamond Comic Distributors sometime in the near future, but for now those retailers who are open for business may contact the publisher directly for their whole line.