Mockingbird – Volume 1: I Can Explain 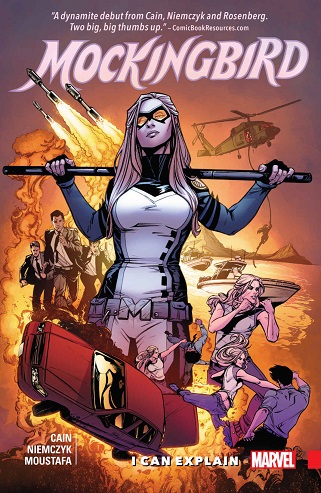 Bobbi Morse, aka Mockingbird is an Agent of SHIELD, a former Avenger, and now solo heroine. It starts with a nice issue of introductory material, then quickly she and Lance Hunter are infiltrating the Hellfire Club. From there she encounters a preteen who has developed powers, and there’s also some dog-sitting.

The first arc of this limited series was framed in a really cool way. In the debut issue, we see Mockingbird enduring tests for her mental and physical health. It keeps jumping forward week by week with the same tests, yet each time she goes, we get a teaser about that week’s predicament. The issues that follow fill in those gaps by showing us what happened between the pages. This makes the debut issue a perfect bookend, because after finding out why she was dressed like a dominatrix, you’ll want to reread the beginning to search for what you might have missed.

This book hooked me because it was written by Chelsea Cain. Though she was new to comics, Cain is an accomplished novelist and columnist. She wrote a shocking, intelligent crime novel series (starting with Heartsick) that pushed psychological boundaries without being too gratuitous and provided a new kind of killer villain.

Her work on Mockingbird did not disappoint. The tone is very different from those novels – as it should be for this type of story – but her articulate style, biting wit, and wonderful storytelling capabilities made it just as great.