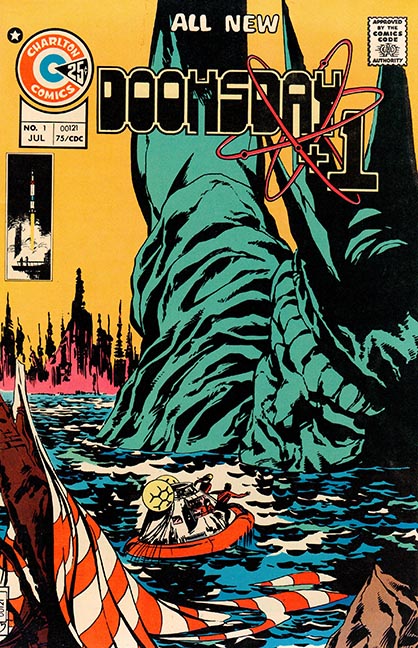 As a comics publisher, Charlton was something of an also-ran, but they certainly had their moments. In addition to some solid war comics and intriguing superhero offerings, they also had this post-apocalyptic tale from 1975.

In a near-future scenario, a South American dictator named Rykos launches two nuclear missiles, one at New York and the other aimed at Moscow. The superpowers, each believing the other had initiated a first strike, retaliated with their respective full arsenals. The world was thrown into chaos.

Just before that, though, three astronauts, Captain Boyd Ellis, his fiancée, Jill Malden, and physicist Ikei Yashida, had been blasted into orbit. Weeks later, they land in a melting field in Greenland, and find what survived the atomic holocaust is a topsy turvy world. Among their unexpected discovers, a dethawed wooly mammoth and a third century Goth named Kuno.

There’s lots of action, romantic angst, and everything you’d expect from a disaster movie. Even the cover featured a destroyed Statue of Liberty, back when that wasn’t quite yet a trope.

To enjoy this series, you have to ignore some of the crazy “science,” but the basic scenario – astronauts return to an Earth gone crazy – had been ingrained in the culture by 1968’s Planet of the Apes (again, see: Statue of Liberty), and given half a chance the scenario usually proves entertaining. It definitely does in this case.

The series only ran six issues before it went into reprints, and it is best known as the first original, color comics work by artist John Byrne, who of course would go on to become John Byrne.