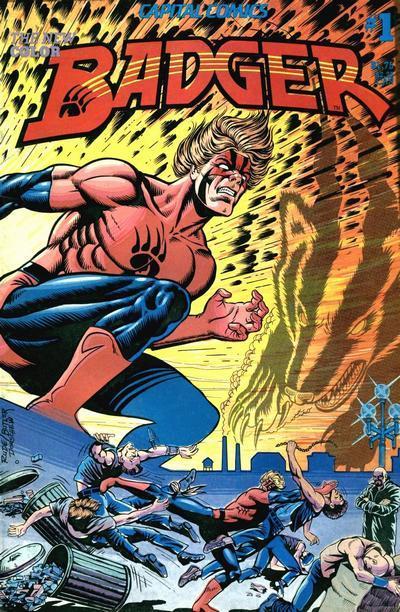 Shortly after Capital Comics launched their color comics line with Nexus Volume 2, they rolled out The Badger, another creation from Nexus writer Mike Baron.

The Badger was Norbert Sykes, a former mental patient with an almost impossibly impressive array of martial arts skills, penchants for mayhem and calling people “Larry,” and something of a multiple personality disorder. When Capital folded their comics line after just four issues of The Badger, the title migrated to First Comics for more than 60 issues, a miniseries and graphic novel.

Badger later had a multi-issue run at Image Comics and then appeared from IDW Publishing, and just this week it was announced that the character would make his return from the newly merged Devil’s Due/First Comics.

Badger was oddly and magnificently employed by Ham, an ancient Druid weather wizard mysteriously awakened from centuries of sleep and now living the highlife in modern day Wisconsin. His friends also included Daisy, Norbert’s former healthcare caseworker, and Mavis Davis, M.D., who later became Badger’s wife. There was also Lamont the buffalo and a number of other characters.

The whole thing, though, started off with The Badger #1, with a cover by Nexus artist Steve Rude and original series artist Jeff Butler, who later did a fantastic Green Hornet.

Rude was just coming into his own on Nexus, making the jump from work that was reproduced in black and white to color comics. His covers had already begun to posses a Kirby-esque, crackling power. Over a span of decades now, no one has consistently conveyed the seemingly contradictory tones in Baron’s writing as has “The Dude.”

Butler, whose tenure on The Badger wasn’t very long (though he did do several strong issues later in the series), had a strong sense of composition and his collaboration with Rude bore solid, compelling results. The piece is dominated by Rude’s aesthetics, but there are Butler elements in there, too.

The Badger #1 lived up to its cover and offered readers a distinctly different hero, and it’s definitely worth tracking down.