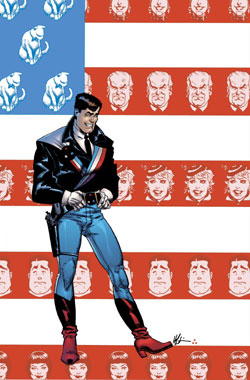 When Howard Chaykin launched American Flagg! at First Comics in 1983, he did so with a particular vision for the art, a unique ear for clipped or incomplete dialogue, and a story sensibility unlike anything else on the market. The result, aside from being an instant hit, was a revoutionary comic book that immediately started influencing other creators. In his foreword to this collection, Pulitzer Prize-winning author Michael Chabon comes the effect of Flagg on other comics to that of Batman: The Dark Knight Returns (1986) and Watchmen (1986-1987), and he’s correct in doing so. While this notion might surprise some, to those who were there, particularly up and coming creators at the time, it offers zero shock.

Like those other two titles, this series was clearly aimed at adults. While today that seems like a prudent business practice, most comics are clearly not aimed at kids anymore and haven’t been for years, it was still groundbreaking when it was released.

Chaykin’s use of TV news reports and repeated imagery as storytelling devices, the partial dialogue of things interupted or overheard, and hyper-stimulated action punctuated by a consistantly warped, populist philosophy all played into the larger picture. Additionally, even his use of Ken Bruzenak’s distinctive lettering as groundbreaking in its incorporation into the visuals. There was little, if anything, about Flagg that wasn’t fresh.

The story itself concerned Reuben Flagg, newly arrived from Mars, where he had been down-sized as a video star in favor of his own computer-generated image. Flagg had joined the Plexus Rangers (the Plex was the amalgam of government and business that ran everything) and headed to the homeworld to do some good. After first being shocked at how bad things were on the homeworld, he set about trying to change things for the better. That’s when things really started to fall apart and the action really started.

The best thing about this superbly recolored volume is that it offers today’s readers a chance to view this material either for the first time or again. The first 14 issues of American Flagg! are collected along with a new story by Chaykin. In addition to the standard edition hardcover, there is also a limited edition, signed version, and a two-volume trade paperback version.