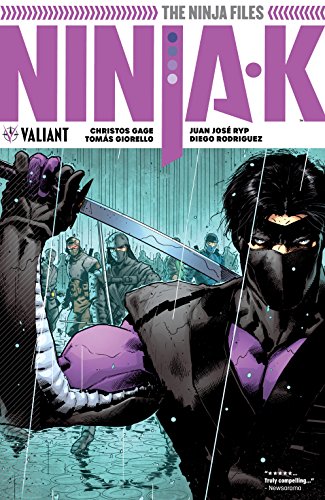 Ninjak is back, except in this event he’s Ninja-K. It’s a story that presents the history of MI6’s Ninja Program – starting with Ninja-A or simply The Ninja. Each successive iteration changes the style or improves on the technique all while handling MI6 missions. For almost a century the Ninja program has created elite agents that take on the most difficult cases.

This leads to Ninja-K, Colin King who fashions himself as more of a mercenary than MI6 agent. He has already lived through some extremely difficult missions and has the scars to prove it. Now, his life is getting more complicated when he learns that someone is hunting the Ninja agents.

Christos Gage wrote a very good series. The character’s history is provided with enough detail to inform the uninitiated but not bore the returning fans. We meet other characters similar to Colin King, which filled the story with action and complicated individuals. There are twists, some great fight scenes, all the spy gadgets and goodies, and a bit of poetic style to the former Ninja agents’ stories.

The art by Tomás Giorello and colors by Diego Rodriguez are great compliments to the story. It is a moody, yet still flashy secret agent adventure that’s more Batman than Bond.