Search
Review: Hooked on Hollywood: Discoveries from a Lifetime of Film Fandom 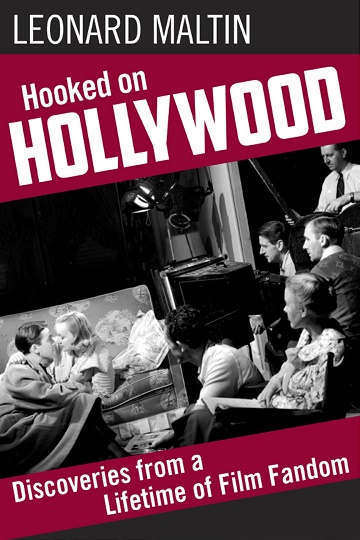 Most people enjoy movies. For some it’s in 90-minute intervals, for others it’s conversations with friends about exciting scenes, and for others it’s a passion. In his new book, Hooked on Hollywood: Discoveries from a Lifetime of Film Fandom, film historian and critic Leonard Maltin shares that passion.

Maltin has been studying film and writing about the subject for nearly his entire life. It’s taken several forms over the course of his career, and now Maltin has dipped into his authorial data bank to anthologize material from Film Fan Monthly to Movie Crazy in this new book.

After an introduction that provides a bit of history on the author himself, the book is setup in four categories of Hollywood featurettes, early interviews, later in-depth interviews, and a segment on RKO. The special articles include a look at the music in Casablanca and Blues in the Night, the problems behind On Your Toes, The Depression’s “Forgotten Men” and Gold Diggers, the story behind Young and Beautiful, how actors transitioned into early television, and remakes of early film. Next comes several early interviews conducted with actors, directors, and industry pros such as Anita Loos, Burgess Meredith, Joan Blondell, Ralph Bellamy, and Madge Evans. Those transition into the later in-depth interviews that include longer conversations with John Cromwell, Peggy Webber, and Dick Jones, among others. The book closes by revisiting RKO with a study on the studio’s ups and downs, followed by synopses and modern views of dozens of movies.

This book is entertaining and engaging for golden age film fans and historians. Through the articles and interviews the reader will discover a new appreciation for the complicated filmmaking process. Studio heads, directors, composers, actors all the way to assistants and extras have decisions to make and parts to play that determine a film’s financial and entertainment success.

Through Hooked on Hollywood, readers will learn how actors and filmmakers responded to the first talkies, how remakes became popular way before modern film, learn the challenges of early equipment like cameras, and complications surrounding actors’ contracts for particular studios. While the book tells stories isolated to certain subject matter, those pieces reflect the grander scope of early Hollywood.

Maltin does an impressive amount of research for his articles that present important details and little known facts on the subjects. He fills the book with industry terminology without bogging the reader down in jargon. His articles are cohesively framed to tell stories that are woven through the lives of moviemakers. Several articles balance the film history from the entertainment perspective as well as the business side, which illustrates the necessary relationship between the two.

The interview sections contain interesting and occasionally awkward conversations with the subjects. At the beginning of the early interviews portion, Maltin recounts his first interview and how young he was at the time. Many of these early conversations were done when he was still a teenager – sitting across from Hollywood legends. Maltin freely admits and points out that his interview skills were still growing in those days. The later interviews reflect the fine-tuning of his skills with insightful questions and smoother conversations.

The interview subjects speak candidly about their experiences. They tell personal stories, explain aspects of the filmmaking process, share opinions on fellow stars they worked with, discuss reactions to talkies, and a plethora of other subjects.

I love movies and enjoy learning about the behind the scenes work, but I’m not usually a fan of reading things written by film critics. There’s a habit among film reviewers to pad their work with fancy phrases and four syllable words that offer no real content on the film. Maltin avoids this pitfall by keeping the focus on the movie or story he’s covering. It’s an entertaining, informative volume on movie history.

Hooked On Hollywood is a 386-page paperback, published by GoodKnight Books. It is now available at Amazon, Barnes and Noble, and in brick and mortar bookstores.

To read an interview with Maltin on his new book, visit our Main Event section in Scoop.