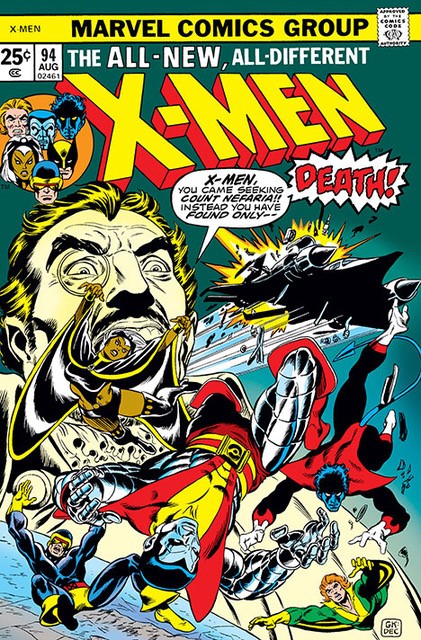 Title: “The Doomsmith Scenario!”
Synopsis: When Count Nefaria and his Ani-Men take over NORAD, Cyclops and the new X-Men race to save the day.

Second opinion: “Cockrum’s unassuming art style … gave a veneer of excitement to the X-series and was in no small part the reason for the book’s eventual success.” – Pierre Comtois, “Marvel Comics in the 1970s: An Issue By Issue Field Guide to a Pop Culture Phenomenon: Expanded Edition,” 2021

Cool factor: With few exceptions, X-Men had rarely matched the energy or excitement of this new lineup. This series bristles with potential
Not-so-cool factor: Did you read that part about Croaker?

Notable: According to Chris Claremont, X-Men #94 and #95 were originally intended to be Giant-Size X-Men #2.
Collector’s note: According to MyComicShop.com, there is a Mark Jewelers variant of this issue.

Character quotable: “Just do us all a favor, and spare us the soap opera, huh?” – Wolverine, clearly not aware of what he was getting himself into
A word from the writer: “How did I feel at the assignment? Excited. Happy. Eager. I was working on characters that looked intensely cool, with an artist whose work I’d admired ever since his stint on DC’s Legion of Super-Heroes. It was my first legitimate superhero series.” – Chris Claremont, talking about taking over the X-Men, on “Simple Survival,” a 1993 essay published in Uncanny X-Men Omnibus Vol. 1, 2006