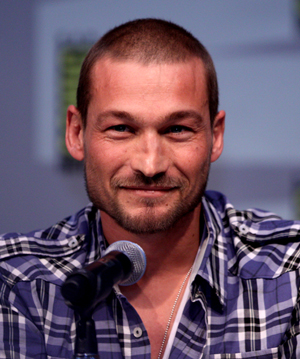 Be Here Now is an inspiring feature documentary and love story about the late actor Andy Whitfield, who fought life-threatening cancer with the same determination and dedication he brought to his lead role in the hit television show Spartacus: Blood and Sand.

Whitfield, in the prime of his life, had just realized his dream of becoming an international star when he was diagnosed with non-Hodgkins lymphoma. Overwhelmed by news that the best medical treatment the world had to offer would give him only a 25% chance for survival, Whitfield and his wife Vashti set their sights on beating the terrible disease. With matching “Be Here Now” tattoos to seal their promise, the couple vowed to take Andy’s healing into their own hands and live life in the present, not in the shadows, every step of the way.

With no promise of what would happen, Andy invited a camera to follow him throughout his journey as he explored both medical and alternative healing options in Australia, New Zealand and India. This unprecedented access and his openness and honesty give the audience an intimate look into his personal life.

It was Andy’s hope that by telling his story through a documentary, he might help or inspire others facing similar challenges, while pushing to accelerate the pace of cancer research around the world.

What he did not anticipate was that the story would also capture his family and friends’ determination, love and affirming attitudes. Be Here Now transcends the subject of cancer and becomes a universal life-lesson about living fearlessly, going for your dreams, embracing each moment and living in the present – despite the potential outcome.

Led by the Academy Award-nominated and multiple award-winning filmmaker, Lilibet Foster, a camera crew followed Andy and his family’s unfolding story for more than a year. Andy also filmed personal diaries and took photographs throughout his journey. With the support of Sam Maydew (producer, Andy’s manager and principal of talent management and production company The Collective), who brought everyone together, the documentary is already well under way. But the film has reached a point whereby additional funding is needed, and the public is now being invited to get involved in the making of this inspiring documentary.

A Kickstarter webpage that enables Andy’s fans and supporters to pledge and chip in toward completion of the film has been set up for donations. Contributors at various levels will be rewarded with limited-edition and collector's item gifts while at the same time helping to make Andy’s wish come true: to inspire others through the Be Here Now documentary.